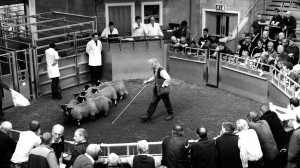 The black and white, three-minute video was filmed in early October at the height of the season for the pedigree sheep breed at United Auctions’ Stirling Agricultural Centre.

It captures the action in the sale ring with UA’s auctioneers, particularly Matt Stevenson, ‘dancing’ to the track from the rostrum while bids are made and sheep breeders watch the animals whirl around the ring.

The new track, ‘Notes Between F & E’, is taken from the band’s latest mini-album ‘Better Ghosts’ and the video has been shared on music websites and blogs in the UK, France, Germany and North America since its release this month, where it’s been described as “a surreal insight into animal auctioneering.”

Directed by BAFTA-Award winning filmmaker James Alcock, the video was inspired by Werner Herzog’s 1976 documentary ‘How Much Wood Would A Woodchuck Chuck?’ about the World Livestock Auctioneering Championship.

He said: “Bringing lo-fi indie rock to an auction market may seem like an unusual juxtaposition, but there seemed to be a natural correlation between the beat of the track and the rhythms of the sale ring.”

Neil McLean, group joint managing director of United Auctions, said: “It’s great to see the traditional world that we’re so familiar with given a contemporary, artistic makeover that sits so well together. We’re delighted with the result.”

The band’s Jack Cooper has said that “the video highlights what some may feel is a beautiful piece of Britain’s history, the strange tradition and rituals of the livestock auction, though others may see it as something entirely different.”

The track is out now on FatCat Records.

Issued by JK Consultancy Ltd on behalf of United Auctions. For further information please contact Jenny Kumar of JK Consultancy on 07989 557198 or jenny@jkconsultancy.com

United Auctions (UA) are Scotland’s leading livestock auctioneers and procurement specialists and operate a network of different auction markets across Scotland, including Stirling, Huntly, Lairg, Dalmally, Tiree, Islay, South Uist and an area office and lairage facility at Oban. The company conducts auctions of both commercial and pedigree livestock, including the world-famous Stirling Bull Sales (previously known as the Perth Bull Sales) and provides farm-to-farm and farm-to-abattoir procurement services.